Hometown Race Pressure: Drive of His Life Earns Andrew Carlson Career Highlight Win at ERX Off-Road National
ELK RIVER, Minn. July 16, 2019 – Andrew Carlson notched his first career PRO 4 win in front of his hometown fans during the 4th Annual ERX Off-Road National this past weekend. The victory was undoubtedly one of the biggest of his still young short-course career and easily one of the most exciting overall in 2019 Lucas Oil Midwest Short Course League action. 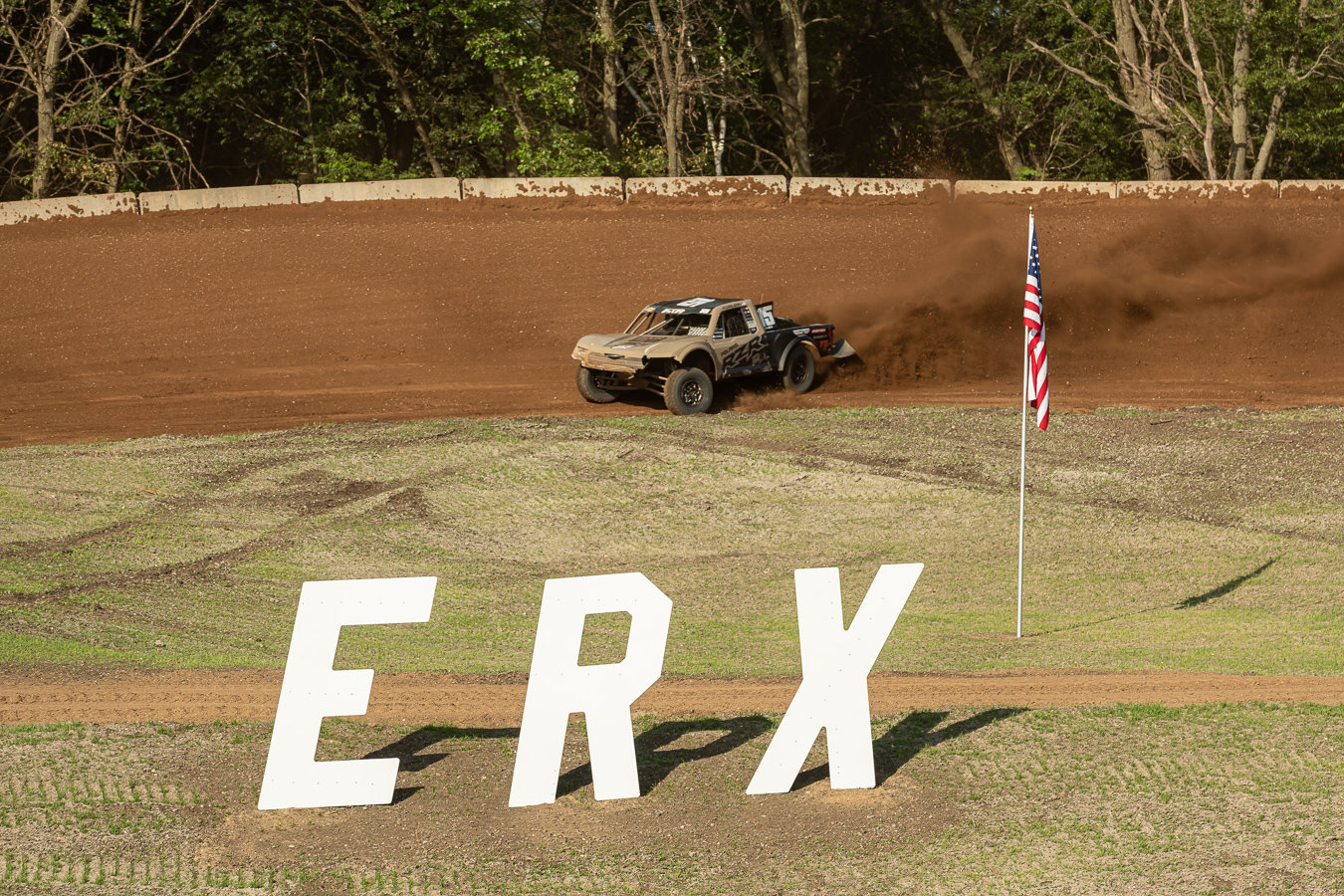 It’s said good things come to those who wait, and that’s exactly what the Carlson Moto team was forced to do Saturday afternoon as they anxiously awaited the arrival of a critical part from California. The nervous tension was the result of day one action that saw Carlson succumb to mechanicals in both PRO 2 and PRO 4 finals. The first ended Andrew’s day in PRO 2 almost as quickly as it started, as he coasted to a stop just moments after the race started. The second saw him maintain composure and finish third while fighting a truck with an inoperative front differential.As the team feverishly prepped the PRO 4 truck, Andrew hit the track looking for redemption in his Polaris RZR® sponsored PRO 2 truck, where he battled with Keegan Kincaid, Cory Winner and Kyle Kleiman. After a mid-pack start, Carlson soon worked his way up to second before the competition yellow. An over-rotation in the high-banked Talladega turn opened the door for Winner to slip past, shuffling Carlson to third where he would remain despite some intense pressure from Kincaid. At the line, it was Kleiman, who swept PRO 2 on the weekend for his first and second career victories in the class, followed by Winner and Carlson.

With three races down and one remaining, it would be Carlson’s last chance to make a statement in front of his hometown fans. To do so he would have to beat the father-son duo of Johnny and CJ Greaves. CJ is arguably the best short-course driver in North America, and Johnny is one of the all-time winningest drivers in off-road racing history with 10-championships to his credit, and counting.

With all eyes upon him, Carlson didn’t disappoint. From an early third place position, you could almost taste his hunger for victory. With blazing-fast desert racer Jimmy Hendersen nabbing the holeshot, back-to-back mistakes in sequential turns allowed both Johnny Greaves and Carlson to slide up. However, Carlson wasn’t done yet. With the competition yellow fast approaching, Andrew went big on the fly-away, soaring a full truck above Greaves and landing alongside as they shot into the new Ziegler Cat-apult corner. From there it was pure determination and a never lift attitude that propelled Carlson inside and ahead of Greaves through high-speed turn one. 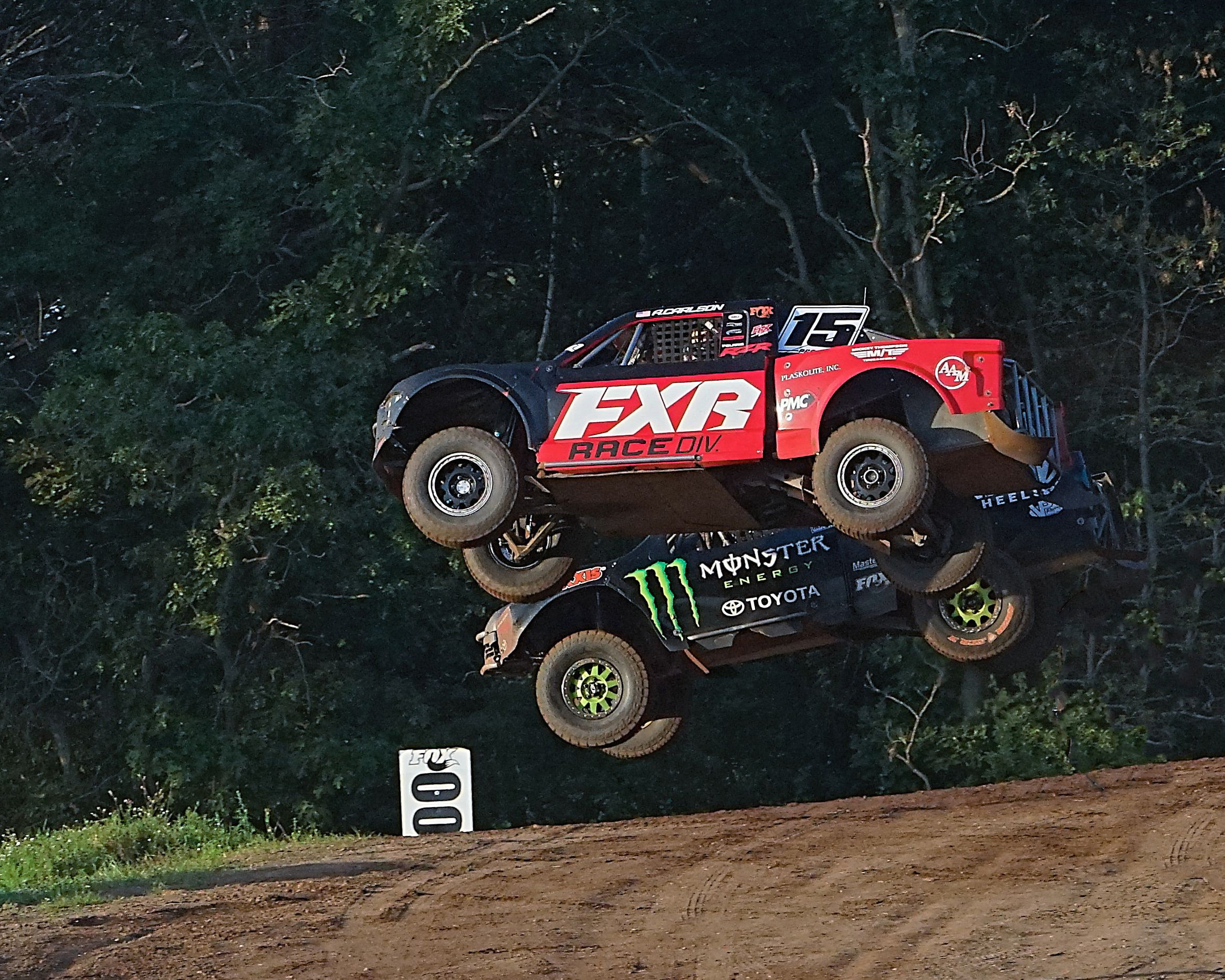 As the competition yellow waved, Johnny Greaves was forced to pit due to a flat tire, putting his son CJ Greaves immediately behind Carlson. It was a position Andrew knew all too well, a scenario he was in the day previous, albeit with only three wheels providing thrust. On Friday CJ slipped under Carlson for the win. It wouldn’t happen this time.

With the crowd on its feet, Carlson fought off Greaves lap-after-lap. The team had done its work; the truck was working flawlessly, and Andrew held-off one of the fastest PRO 4 drivers in the world. In a tide of emotions, Andrew took the win and thousands of fans erupted while an elated team and family waited for Andrew in the winner’s circle. 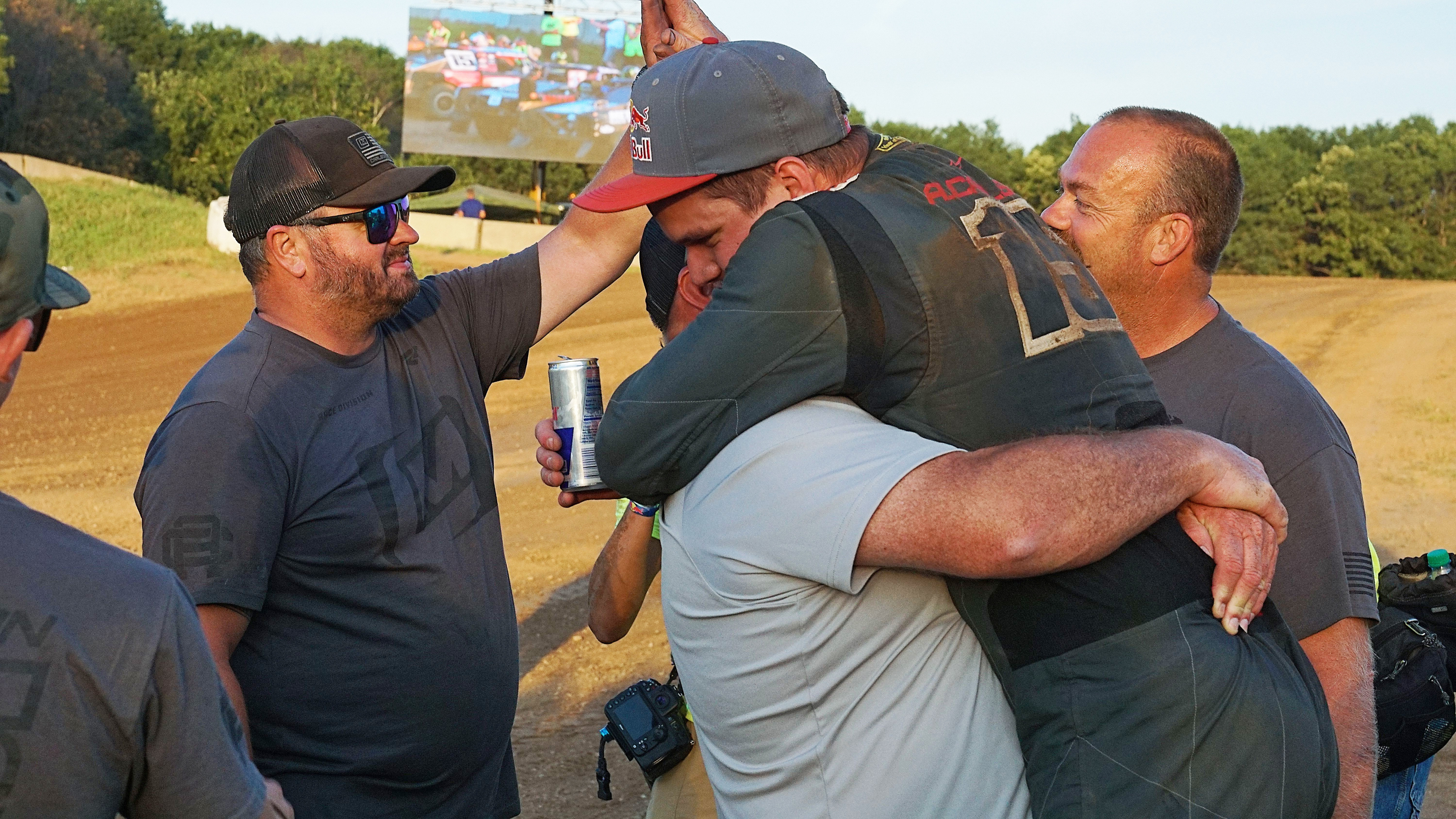 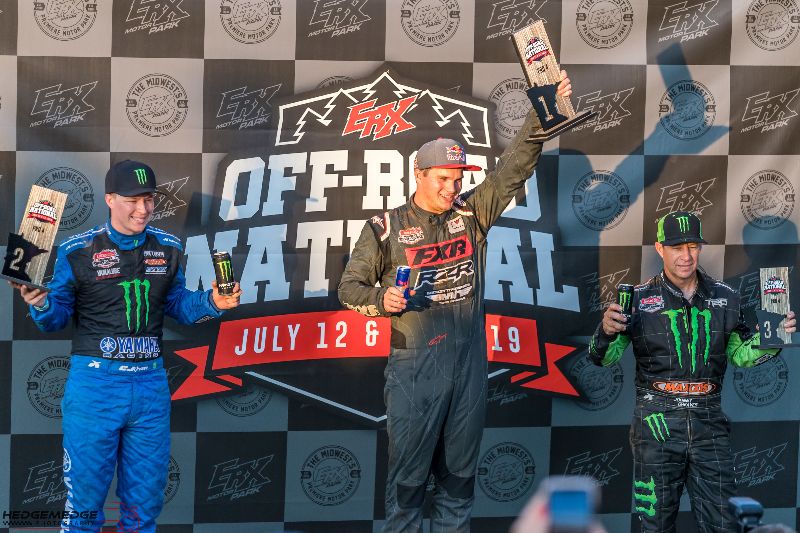 “I don’t know if it can get any better,” said an emotional Carlson as he took in the moment. “To win here, in front of my friends and family…I couldn’t be happier or more proud. There were tears when I crossed the finish line.”

The win punctuated a weekend where not just Andrew made a statement to the off-road racing community, but so too did ERX Motor Park. After just four short years, the facility has fast become recognized as one of the best off-road racing facilities in North America. Fans appreciated the attention to detail, the family-friendly atmosphere and a staff that was more than welcoming. Equally impressed were the racers, who loved the track, vowed to spread the word and proclaimed they would return in 2020. 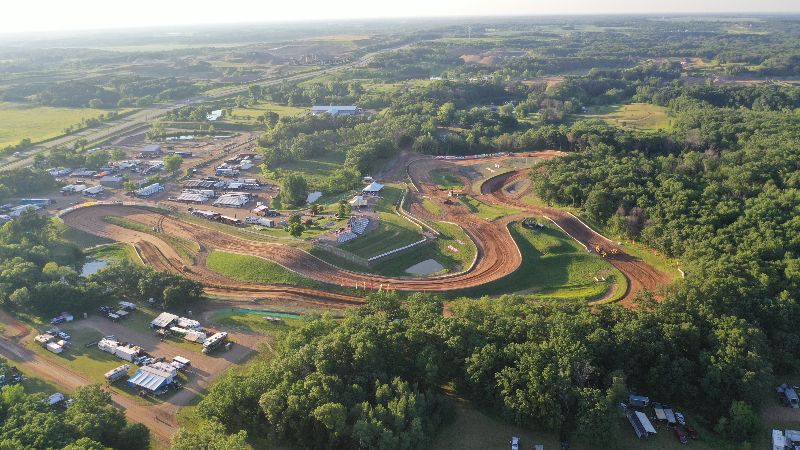 “We are a family,” said ERX co-owner Chris Carlson, who along with Todd Plaisted had the vision to create a world-class, fan-friendly motorsports park over 10-years ago. “We want everyone to feel like they are a part of ERX…a true community atmosphere. I think our opening ceremonies here Friday and Saturday sum it up best. We stand for the anthem, bow our heads when we pray and put veterans and families first. It’s something we’re incredibly proud of.” 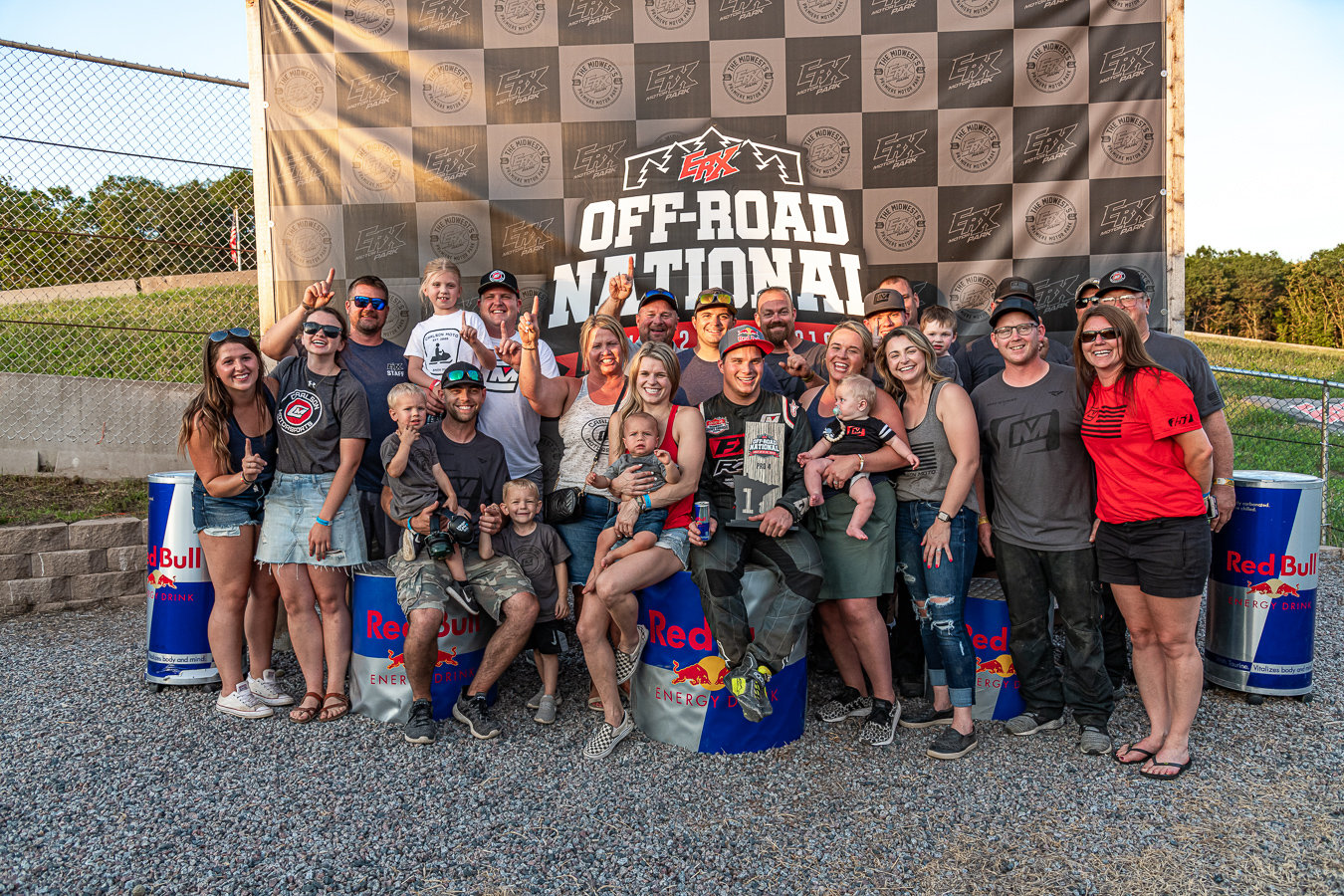 With a huge win filling their sails, the Carlson Moto team will start making preparations for the Bark River Off-Road Rumble, August 9-10, 2019.